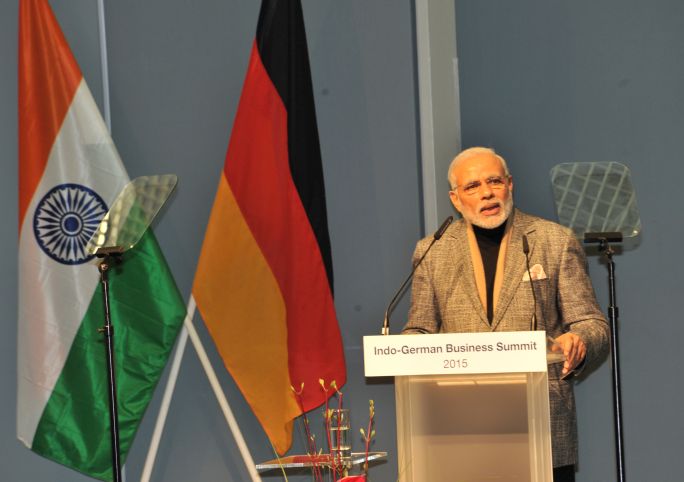 I am really happy to be here in the Hannover fair. It is an added pleasure to talk to you that too in the presence of Chancellor Merkel. Myself and Chancellor Merkel had a very good interaction over dinner last night. You also must have met a number of Indian companies and CEOs. I believe that the participation in Hannover fair would be very useful for both sides. I request you to visit the India pavillion and the stalls of our State Government and private companies.

You will be able to see for yourself the winds of change in India. We are very keen to develop the sectors where you are strong. We need your involvement. The scope and potential, the breadth and length of infrastructure and related developments is very huge in India. Just to give you some examples:

• We have planned to build 50 million houses by 2022. In addition, we are going to develop smart cities and mega industrial corridors.

• For this purpose, we have refined our FDI Policy in construction. We have also come up with a regulatory framework for this sector.

• We have targeted 175 Giga Watt of renewable energy in next few years. In addition to generation, the issues of transmission and distribution of electricity are equally important for us;

• We are modernizing our Railway systems including signals, and railway stations. We are planning metro rail in fifty cities and high speed trains in various corridors.

• Similar is the case with Highways.

• We are putting up new ports and modernizing the old ones through an ambitious plan called Sagarmala;

• Similar focus is on upgrading the existing Airports and putting up regional airports to enhance connectivity to places of economic and tourist importance.

• In financial services too, we are moving towards a more inclusive and faster delivery of financial products including bank loans and insurance.

• For this purpose, we opened 140 million bank accounts; increased FDI in insurance upto 49% and have set up MUDRA Bank.

• We also announced innovative schemes for insurance and pension to enhance social security for our citizens.

We also want to promote manufacturing in a big way particularly to create jobs for our youth. For this purpose, we have launched a campaign called “Make in India”.

All this is a historic opportunity for the German companies. You would already be knowing the direction of my Government and the steps we are taking. We have committed ourselves for creating and improving the business environment. I can assure you that once you decide to be in India, we are confident to make you comfortable.

Germany ranks 8th among foreign investor countries in India. About 600 Indo-German Joint ventures are presently operating in India. The purpose of my being here and participating in the Hannover Fair is to highlight that there is more potential in Indo-German economic collaboration. Though we have a vibrant relationship, our economic partnership is not as much as both countries would like to have. The flow of investments from Germany is well below the potential and less than Indian investments in Germany.

Many more German companies have the possibility of investing in India to take advantage of India’s potentials. The potential lies in Manufacturing as well as infrastructure and in skill development for that purpose. I know that the reason for this situation may not be from German side. It is from the Indian side also.

I am here to assure the German companies that India is now a changed country. Our regulatory regime is much more transparent, responsive and stable. We are taking a long-term and futuristic view on the issues.

Lot of efforts have been made and are still underway to improve the ‘Ease of Doing Business’ in the country.

• Reducing the complicated procedures, making them available at one platform, preferably online, simplifying the forms and formats has been taken up on war footing.

• Definite mechanisms for hand holding have been set up in the form of hub and spoke. Invest India is the nodal agency for this purpose.

We do believe that FDI is important and it will not come in the country without a globally competitive business environment. Therefore, in this year’s budget we have rationalized a number of issues which were bothering you. In particular,

• We have removed lot of regressive taxation regimes. In our very first Budget, we said we will not resort to retrospective taxation. And if such issues do arise, they will have to be reviewed at the highest level. We have taken bold steps of not dragging the litigation in a few cases where we felt that the steps of the previous government were not on right lines.

• In this budget, we allowed Tax pass through for AIFs, rationalization of capital gains of REITs, modification in PE norms and deferring the implementation of GAAR for two years. We are constantly working to improve the business environment further.

• We are trying to introduce an element of transparency and predictability in taxation system.

• We have fast tracked approvals in industry and infrastructure. This includes environmental clearances, extending the industrial licences, delicencing of defence items, and simplification of cross-border trade.

• Within a very short time, we introduced GST Bill in Parliament.

Such measures have helped in building up an enhanced investor confidence. The sentiments for private investment and inflow of foreign investments are positive. FDI inflows have gone up by 36% during April-2014 and January-2015 against the same period in previous year;

Our growth rate is about 7%-plus. Most of the international financial institutions including the World Bank, IMF, UNCTAD, OECD and others are predicting even faster growth and even better in the coming years. MOODY’s have recently upgraded the rating of India as “positive” on account of our concrete steps in various economic segments.

It is the effort of my Government to encourage innovation, R&D and entrepreneurship in the country. In this year’s budget, we have set up some innovative institutional mechanisms for that purpose.

Similarly, for infrastructure development, we have taken some far reaching steps.

• First of all we have made an all-time high allocation for Roads and railways sectors.

• In addition, we are setting up India Infrastructure Investment Fund.

• We have also allowed Tax free Bonds in the Infrastructure sector including roads and railways.

I wish all success to the Hannover Messe. I also wish all participants good luck and progress. I also take this opportunity for inviting more and more German companies to India. I assure them all support from my side.

Friends! Indo-German partnership should and will flourish. I expect very good outcome from this coming together. Let us work together in mutual interest and for welfare of the people of the two great countries.

At the end, it is my advice to you to come and feel the change in India’s regulatory environment. Please do not go by old perceptions.

The symbol of lion for make in India has been chosen very carefully. We know that our biggest need today is to create jobs for our 65% population which is young. Hence, Make in India is the need. Hence, the lion because a lion cannot be stopped. We are confident that our journey to make India a global manufacturing hub cannot be stopped that too by our own rules and regulations. We must and we will make corrections wherever it is required.

Once again I invite you to India. I assure you of my personal attention in your success while you are in India.

Thank You very much."